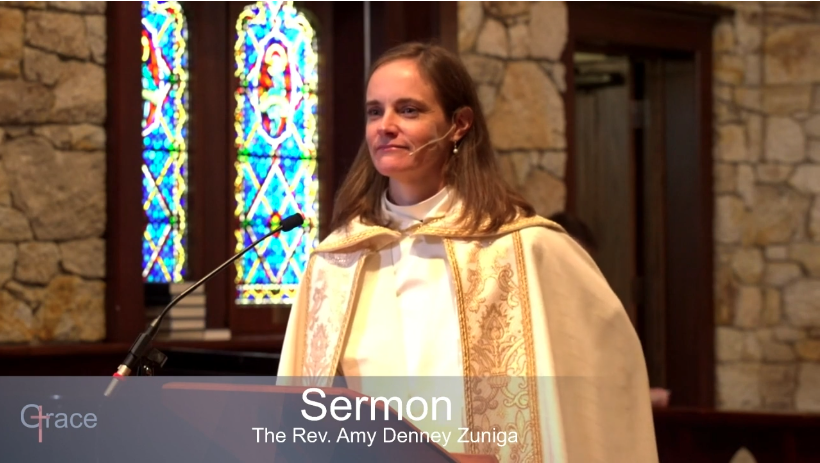 The monk shouts back—“You are on the other side!”

Irony, contrast, opposites— this is the stuff of humor, a powerful tool in art and literature.

The palate with which Luke paints his Christmas story is one of contrast. The Christmas story as told in the gospel of Luke is a study in opposites, full of irony. I’d like to highlight three of those contrast tonight.

The first is summed up in the first line of a beloved Christmas Carol—“One in Royal David’s city, in a lowly cattle stall…”

The city is royal, the Messianic hopes for the king of kings and Lord of Lords who would save God’s people from oppression by the Roman empire are high, but Jesus’ birth is very humble, very simple, so lowly one might not even notice it.

We are living in a time of tremendous division—perhaps not unlike the gorge between the hiker and the monk. In fact, division doesn’t even seem like the right word anymore. People are in different, seemingly irreconcilable places as we process events in a world that seems to be falling apart. Someone told me recently about some a row of ornamental pear trees—some had died, and been replanted. The younger trees, due to our balmy, spring-like weather this fall were in blossom, while the older trees were losing their leaves. We humans are like that. For some it’s fall, and others its spring. We can’t even agree on what time it is. And it’s no wonder. With a climate in crisis, a global pandemic, national political unrest, in this fire-scarred valley… it can feel like the world is falling apart. Or not!!

The second contrast is evident from the very first line of Luke’s gospel that we heard tonight—“A decree went out from Emperor Augustus…” An empire so powerful that it could move people, at great inconvenience, expense, and even danger to individuals, simply so that they could be counted—within this flexing of Rome’s muscles for its own purposes, God makes room, where there is no room. God’s messiah is born in the city foretold by the prophets, the city of his ancestor David. God’s purposes are worked out in spite of and even through the schemes of the empire.

This contrast between the purposes and plan of empire and the purposes and plan of God is nowhere more evident than in the titles. The terms we are accustomed to hear applied to Jesus, particularly this time of year— Savior, Lord, King of Kings, Prince of Peace— all of these were titles applied to Caesar Augustus. HIs birthday was a national holiday and the start of the Roman calendar year. To apply these titles to a peasant-born man executed by the Roman Empire was subversive, if not treasonous.

As best we can tell the gospel birth narratives were written down during the reign of the Emperor Nero, during the first great persecution of the early followers of the Way of Jesus. As they were being dragged to coliseums so that their deaths could be entertainment for the masses, these early Christians affirmed that Jesus who was born to a manger, Jesus who died on the cross, Jesus, not Nero, was Savior, Lord, King of Kings, and Prince of Peace.

Kind of strips away some of the sentimentality of our nice cozy Christmas story, doesn’t it? This is a story people were willing to stake their lives on. Because they affirmed that the way God has shown us in Jesus— the way of self-giving, transformative love, is the truth path to peace. Not power over, but power with. Not domination, but mutuality. Not violence, but loving, non-violent resistance to hatred, evil, and oppression.

The third contrast is perhaps the most obvious, and is encapsulated in the first line of our old testament reading from Isaiah—“The people who walked in darkness have seen a great light.” This is the first of the Advent prophecies which is presented in our Catechesis of the Good Shepherd children’s program, and children from the youngest age ponder what it could mean that “the people who walked in darkness have seen a great light.” It is hard for us electrified humans to really comprehend the natural darkness that was the nightly reality of our ancestors on this planet for thousands of years. But if you’ve ever been camping or backpacking maybe you have had that experience—the night envelops you. It seems to have a force all of its own. A campfire draws you to its warmth and light, perhaps a flashlight enables you not to trip in the darkness, but the darkness is in control. Imagine, in such an ordinary, nightly darkness, “the glory of the Lord shining round about you,” with the presence of an angel messenger and suddenly the entire heavenly host, praising God and singing.

For the shepherds, the words of Isaiah literally came true— the people who walked in darkness, saw a great light! I asked my daughter, who has been raised pondering these words every Advent, what she thought happened to the shepherds after they had this experience, and after they found Jesus in the manger. Did they just go back to tending their sheep and think, “Oh, that was nice?” Or were their lives different somehow? She said “No— they were different. They were really happy they had seen Jesus.”

That’s the end of this sermon, and I’d like to leave the words of John echoing in the sanctuary. But this sermon has a post-script! The PS is what I wrote in my e-news message this week. Perhaps my biggest bandwagon is that Christmas lasts for twelve days, NOT starting on December 13, as some advertisers have now started to claim, but STARTING on December 25!! That’s right!! Real Christmas doesn’t start until tomorrow. And it lasts for 12 days, until January 5. It’s very hard to enter into Advent in a spirit of contemplation and introspection given all the cultural holiday obligations this time of year, but for many people these days between Christmas day and early in the new year are a quieter time. So I’d like to encourage, maybe even challenge you to find some time to rest in the incarnation these twelve days of Christmas. Maybe take on a spiritual practice for the 12 days, perhaps reading the first chapters of the gospels, or signing up for our daily 12 days of Christmas carols emails. Treasure these things in your heart, ponder them like Mary did, let them change you like they changed the shepherds. Rest in Christmas this year, beloved. The savior is come— peace, and joy, to the whole world.